The ethnographic exhibition of the museum presents exhibits from everyday life of the inhabitants of Klaipėda region at the turn of the 20th century such as clothing, items of garments and furniture. 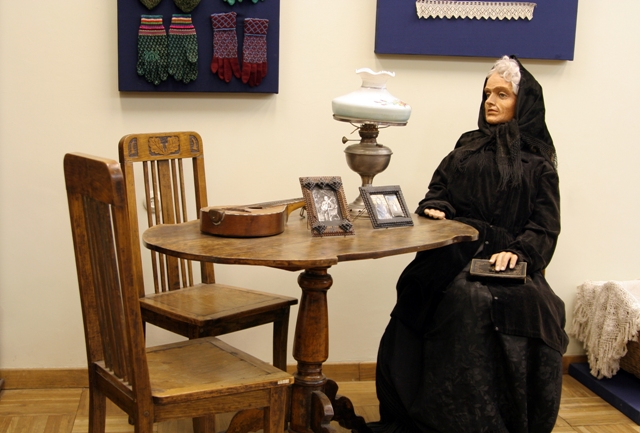 Women's clothes in the Klaipėda region such as skirts, waistcoats, shirts, coats and aprons differ in the manner of sewing, color and details from women's clothes in other Lithuanian regions. The one-color skirts of black, brown, blue or dark green with gaily colored patterns and pleated skirts were specific to the Klaipėda region. Black coats and waistcoats were made of wool or velvet. The shirts with wide, frilled or pleated collars also differed from the shirts of other regions. Not only cuffs but also sleeves below shoulders were decorated with ornaments. Also displayed is one specific element of clothing – a so-called delmon ordalmon. The delmon was an inseparable part of clothing of a woman from Lithuania Minor, not worn in other ethnographic regions. It was a suspended bag or a pocket made of a darker colored velvet, cloth or sateen with birds, flowers and sometimes initials or a date were embroidered with colored threads. The delmon was worn on the right side, under an apron, and tied to a multi-patterned sash round the waist. The ornamentation of delmons was similar to the ornamentation put on chests and coffers in the Klaipėda region. A characteristic feature of the multi-patterned sashes is originality and complexity. Some 30 different ornamental motifs can be found. Such woven sashes were quite narrow, 2–3 cm and 5 to 20 meters long, and they were used to decorate a skirt and to tie a delmon. The collection of sashes is not large, consisting of a few dozen examples. Wide sashes were also popular in the Klaipėda region, but these are not represented in the museum.
An inseparable part of the clothing of the people of Lithuania Minor was a kerchief, the most popular colors being blue, green, black and white. The corners were embroidered with stylised flowers, curved lines and the edges decorated with a fringe 10–15 cm in length. Gloves and mittens of the end of the 19th century are another part of the exhibition. The combination of colors and patterns make the mittens extremely attractive. The women-knitters decorated the mittens not only with initials and words, but also with geometric ornaments and stylized figures of animals and birds. 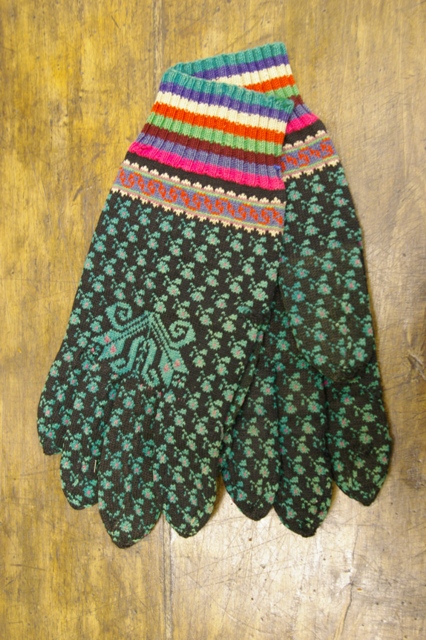 The furniture of the Klaipėda region differs from the furniture of other regions in its specific construction and decorative features. Three types of beds were widely distributed; those of non-extendable width, those of extendable width and those with a canopy. The ends of all beds were turned, carved and shaped. At the beginning of the second half of the 19th century the height of the sides of beds was reduced. About ten beds from the turn of the 20th century are stored in the museum's collection. Visitors to the exhibition have an opportunity to see a bed with a canopy which the people of the Klaipėda region called Himmelbett. A characteristic construction was such that the bed posts were taller and the canopy was made of planks. At the turn of the 20th century sofas were already gaining in popularity. 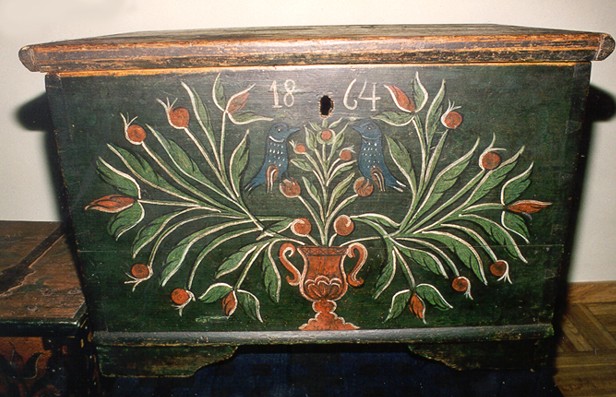 Among the furniture items are massive tables and chairs with backs in the form of a violin which was the most popular element of furniture up to the end of the 19th century. At the end of the 19th century the most popular table construction was a frame type table with side and end foot-boards. At the beginning of the 20th century different types, forms and sizes of tables gained popularity, such as one-leg and four-leg with bent, carved and shaped legs as well as square, oval and round tables. The distribution of chairs with a wicker seat, a soft seat and arm-chairs was a characteristic feature of the beginning of the 20th century. It should be noted that the Klaipėda region was much richer in the types and forms of tables and chairs than other ethnographic regions. New times bought new types of furniture decoration. Till the middle of the 19th century the furniture was usually painted and decorated with stylized painted ornamentation. The most popular colors were dark blue, dark green and red. At the end of the 19th century painted furniture gave way to furniture of natural colors or painted dark brown.
The exhibition also contains a cradle with runners which is a typical piece of furniture for this region. Both this piece of furniture and its name appeared during the influence of the German culture and is called vygė. Also exhibited are dowry chests which, in the Klaipėda region, were made large, rectangular, with higher profiled legs and a flat cover. The front part of a dowry chest usually had a painted floral ornamentation, a date or initials. Some dozens of dowry chests are stored in the collections of the museum, approximately one third of which are from Žemaitija.

The ethnography collection of the museum also includes various household utensils and tools, which were used in apiculture, bread baking, flax manufacturing, ironing,etc. These exhibits represent the trades of Lithuania Minor at the end of the 19th–the begining of the 20th century.(This information is currently under construction.)