In the spring of 1900 the Klaipėda cellulose factory started its operation. It is the largest enterprise of the city and region. In 1905, following the merger with the paper factory in Aschaffenburg, Bavaria, it became a branch of this company. When the Klaipėda region was detached from Germany following the Versailles Treaty in December 1919 Adam Vorbeck arrived in Klaipeda from Aschaffenburg with the objective of turning the factory into a formally independent joint-stock company. A. Vorbeck was made the factory’s Commercial Director and member of the company’s board. Shortly thereafter he became involved in the political life of the region by joining the regional German party (“Memelländische Volkspartei”). In 1925 he was elected member of the regional parliament (“seimelis”) and soon resigned from the cellulose company. In the Regional council (“direktorija”) presided over by O. Kadgiehn he took over the post of Director for economic and financial affairs of the region from December 1927 to August 1930. For ten years A. Vorbeck was also a member and Vice-Chairman of the region’s Chamber of Industry and Commerce. For several years he owned the former Dovilai house situated near Klaipeda. In 1932 he withdrew from political activities and returned to Bavaria. Until his death on 07.11.1954, he lived in his manor (Schlößchen) in Dettenheim near Weißenburg. 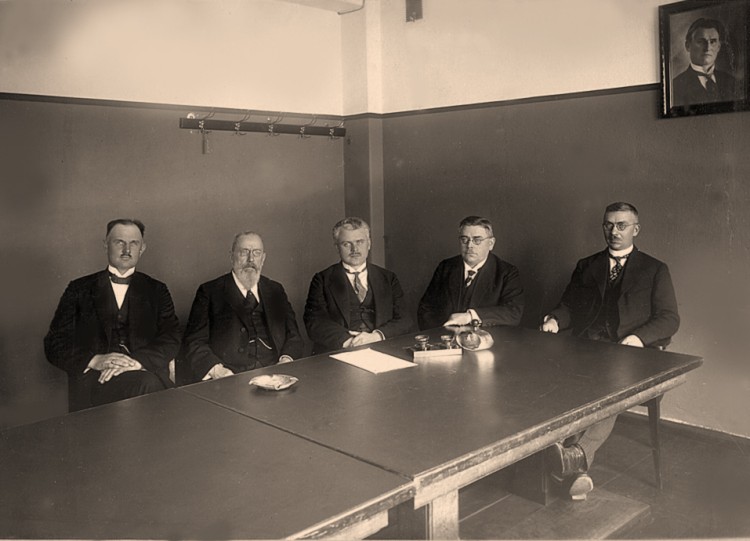 Members of the Board of Directors Governor. A. Forbekas is second from right

Since the spring of 1993 the grandson of A. Vorbeck Dr. Michael Vorbeck has been sending various materials from his grandfather’s personal archive to the Lithuania Minor History Museum. Thanks to him Adam Vorbeck’s bequest has appeared in the Museum.
As of October 2000 this bequest contains over 1700 documents including printed matter items and photographs. The material could be classified into several subject groups:
1. Documents from the Klaipėda cellulose factory include the Company’s Incorporation Charter, the Articles of Association, Regulations of the Board activities, annual accounts, minutes of the sessions of the Supervisory Board, various production statistics, calculations, notes, accounts, bills, commercial correspondence, documentation concerning Director A. Vorbeck’s house residence and photos of the house exterior and interior, annual accounts of the Aschaffenburg Company and other items.
2. Documents from the Dovilai manor include a copy or the original of the Royal Charter authorising a mill for the manor, two sales-purchase contracts of the manor in 1923 and 1927, books of expenses and income of the manor from October 1923 to December 1924 and from June 1924 to December 1925, the inventory, bills and insurance policies of the repair work and insurance, cheques, accounts, extensive correspondence, photos of the buildings, park and fields in 1925 and other items.
3. Documents from the Klaipėda Regional Assembly (“seimelis”) and the Regional Council with various documents of 1926 and 1930 include the agenda of the Assembly sessions, draft bills and amendments of laws, financial estimates, proposals and motions of the committees and factions, statistical material, agenda of the Regional Council’s sessions, resolutions, decisions and decrees of the Regional Council, notes a concerning negotiations with the central authorities, correspondence with the Governor’s office, schedule of the Council officers, some documents related to the regions’ authorities, correspondence, certain accounts, several photographs and other items.
4. The collection includes many documents from business companies, insurance agencies, service firms and tradesmen active in Klaipėda in the 1920s, accounts, cheques and receipts from professionals including lawyers, doctors and others. The collection includes, for instance, a bill signed by Dr. Neumann, a veterinary surgeon with political ambitions.
5. Creative works and journalistic writings by Emil Vorbeck, A. Vorbeck’s son, include mostly essays, short stories, newspaper cuttings with articles from Klaipėda newspapers and the press of German cities, and a play.
6. Personal correspondence.
7. Miscellaneous items which include a rare photo album of Klaipėda and environs from the beginning of the 20th century, a postage stamps collection from the French period, photos and postcards of Klaipėda, Šilutė and the Curonian Spit and other items. 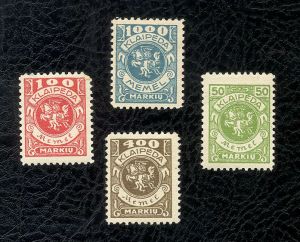