The collection of documents of the Museum covering all periods until 1939 includes two thousand documents. P. Gasiūnas’ collection is distinguished for its historical significance. This collection was handed over to the Klaipėda Regional Studies Museum by the Rokiškis Regional Studies Museum in 1958.
P. Gasiūnas (1897–1966), a collector of printed items, started to collect press materials from 1924 whilst working in Kaunas, Šiauliai and Klaipėda. The collection includes newspapers, books, posters and proclamations. He arranged exhibitions in Klaipėda in 1937 and in Šiauliai in 1939. In 1946 P. Gasiūnas donated his entire collection of 45,000 items to the Rokiškis Regional and Šiauliai “Aušra” Museums. The prints donated to the Rokiškis Museum contained 36 documents files associated with the Klaipėda region. It was part of these files that supplemented the documents collection of the History Museum of Lithuania Minor. The collection has 400 items bearing the stamp of P. Gasiūnas. Their value and significance is different, therefore the 2 largest documents groups shall be reviewed. 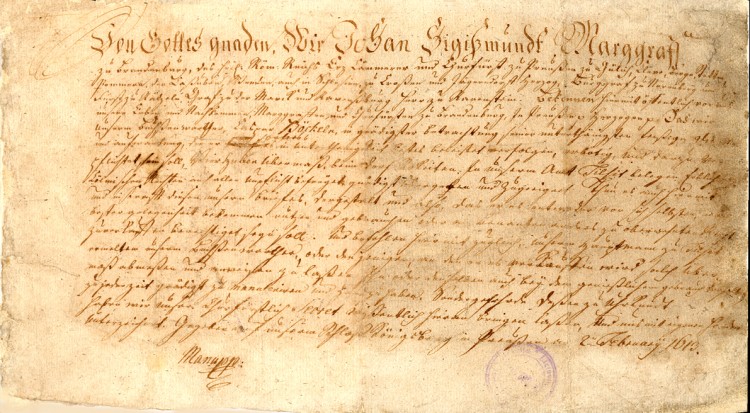 Document from Margrave of Brandenburg to Kursfurst of Prussia. 1613

1. 70 items of German manuscripts and prints of the 17th–19th centuries. This group includes the oldest document of the Museum. This is a letter of land apportionment in Tilsit County by Johan Sigismund, Margrave of Brandenburg and Kurfuerst of Prussia, dated 1613. Also unique is a letter dating from 1712 to the craftsmen of the City of Tilsit by the Prussian King Friedrich written on parchment. It contains provisions for the Tilsit joiners’ guild, which determine craftsmen mutual relationship, internal order of the guild, and matters of joiners’ training. Design technique distinguish the birth certificates issued in Tilsit in 1765, the certificates of the Tilsit carpenters of 1808, and messages of gratitude by the members of the Tilsit craftsmen association to the building inspector Rauter dated 1847. The Klaipėda county document file of 1837 – 1882 is interesting and valuable. The manuscripts include letters of the Klaipėda magistrate and the Koenigsberg Officers’ Association dating from the end of 19th century. There are also have various 19th century documents of Klaipėda Roman Catholic church.
2. Approximately 150 items of the 19th – first half of 20th century which include posters, advertisements and proclamations printed in Lithuanian and German illustrating political events in Klaipėda region. On the topic of the First World War are 23 items which include notices by the Mayor of Tilsit Mr. Pohl issued from September to November 1914 and various orders from the year 1914 by the German Royal Military command and the Russian Army command occupying Tilsit.
The collection includes an important document of the Lithuanian national and political movement in Lithuania Minor. It is the first proclamation published in Tilsit in 1918 “Lithuanians! Wake Up! Listen! Take Care!" proclaiming the unification of Lithuania Minor and Greater Lithuania. The most important proclamations of the Chief Rescue Committee of Lithuania Minor describe the 1923 January events. These include "Lithuanians, Residents of Klaipėda Region" of January 4th and "Manifesto" of January 9th. We also have the January 13th announcement by E. Simonaitis about the formation of the so-called "rebel directory". The Klaipėda region occupation theme is reflected in proclamations and announcements issued by the region’s directory and occupational authorities on March 23–25, 1939.
The most sizeable part of the documents, approx. 100 items, consists of electoral proclamations. An interesting and valuable proclamation of 1903 is the one urging residents of Klaipėda and Heidekrug (now Šilutė) districts in an election to the Prussian regional authority to vote for the alliance of the Lithuanian candidate, Rokaičiai farmer Dovas Zaunius, and the candidate of the German Free-Thinkers, Party Emil Wobbe, counsellor of the Koenigsberg Municipality. The collection includes another significant document of the same period. It is an electoral announcement of the Lithuanian Conservative Union, the first political organisation of Lithuania Minor established in 1890. Of considerable interest for the students of the political life of the Klaipėda region in 1923 – 1939 are the documents relating to the election to the local assemblies (seimas) of the Lithuanian and German political parties contained in the collection which include parties programs, candidate lists, campaign posters, bills illustrated with drawings and caricatures.
The Museum’s documents collection includes 8 items of manuscript documents files of the turn of the century from Kintai church and Kintai valsčius (rural district). The collection contains certificates made out by village elders of Kintai district dating from 1906 – 1911. These documents, though fragmentary, nonetheless are significant for researchers of the history of Lithuania.
80 items of documents associated with the life and work of the outstanding cultural and public figure of the Klaipėda region, K. Trukanas, were donated to the Museum by R. Trukanas’ relatives in 1964 and 1992. These include R. Trukanas’ birth certificate, passport, certificate of marriage, service sheet and student’s certificate from Munster University. Various letters, certificates, references, letters of attorney, bills, accounts, invitations highlighting R. Trukanas’ professional and social activities can be found in the documents file handed over by the School Association of Klaipėda region. 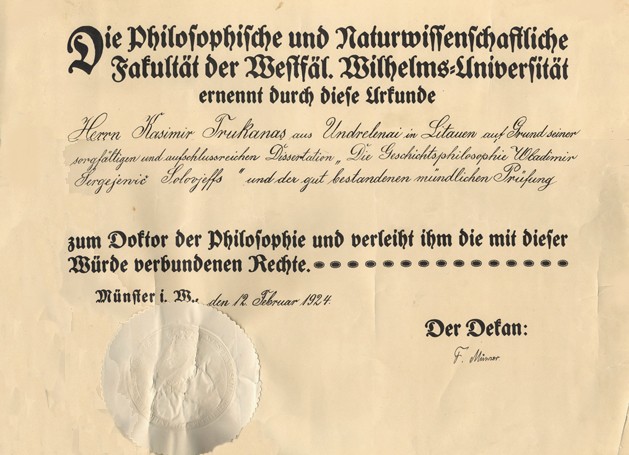 In 1971, interesting and valuable documents referring to the life of Klaipėda at the beginning of the 20th century were discovered while dismantling the pedestal of the monument "Borussia", erected in Klaipėda in 1907 and dedicated to commemorate visit of King Friedrich Wilhelm and Queen Luisa to the city. Also of note is the 1907 Klaipėda County Council and Assembly members’ list, estimate of expenses and revenue of the budget of the Klaipėda city and Klaipėda Merchants’ Board list.
The Museum’s documents collection includes a documents file of 600 pages of the Klaipėda region directory for 1921–1927 from the Statistical department which since 1925 has become the Klaipėda Region Statistical Bureau. The statistical information contained in these documents is a valuable historical source for students of this period with details of industry in the Klaipėda region, agriculture, public health, trade, finance, the demographic situation and ship traffic in the port.
A small part of the collection is made up of the documents of the Lithuanian organisations “Santara”, “Sandora” and “Aukuras” which operated in the region at the turn of the 20th century. The Museum notably possesses the unique membership certificate of the first Lithuanian cultural and educational association in Lithuania Minor "Birutė”, which was founded in Tilsit in 1885.
Of the various documents characterising Klaipėda region’s industry, commerce, trade and transport, outstanding are the 32 items including trademarks and certificates of the Klaipėda companies from the period of 1929 – 1935. Of interest is a 1933 Klaipėda city train and bus timetable, an original 1930 driver’s license and a 1934 permit to use an automobile.
The documents collection includes the 1923 measurement and photographic file of A. Presas of the Zapyškis church, erected in 1578. The inscription on the inside of the title page "Property of the Regional Museum in Klaipėda, purchased in Oct., 1924" is evidence that this is the oldest exhibit obtained by the museum.