The development of Klaipėda Castle

Building of the First Wooden Castle

Klaipėda Castle was first mentioned in a document issued on 29 July 1252. Magister the Great Eberhard von Zeine agreed with the Kursh Bishop Heinrich on the building of a castle between two rivers – the Nemunas and the Dangė. It was the same year as the Knights of the Sword built a wooden castle at the mouth of the Dangė River and named it Memelburg. The Castle consisted of the central "core" of framed buildings and two outer castles which all together were surrounded by ditches and ramparts with palisades and connected by a bridge. The wooden Castle and neighbouring houses and farm buildings were safeguarded by a wooden defensive tower constructed on the coast of the Curonian Bay. A reconstruction of the relief of the Old Town enabled the identification of the first location of the Castle on the left shore of the Old Dangė River. At that time the river-bed divided into branches and the old river-beds formed several islands. The wooden Castle was constructed on one such island. The planned location of the future town was on the right shore of the Dangė River. The town and the Castle had also to be connected by bridges.

As the wooden Castle was built in a swampy area, the location for the construction of a brick castle was chosen to be on the right shore of the Dangė River, where it was plan to develop the town. The construction of the Castle and defensive walls was completed in the same year and brick and wooden buildings were constructed in a rectangular yard. The first chapel was also planned to be constructed here. There is no current information about the towers of the Castle but the walls were surrounded by a path with a width of 8 steps. The brick Castle was defended by ditches, ramparts and palisades. Researchers believe the Castle of that period to be of a fence-enclosure type. The elements of the town appeared in the neighbourhood of the Castle, but Klaipėda came to be known as a town only at the end of the 15th and beginning of the 16th centuries. People living within the premises of the Castle were only serving the needs of the castle.
During the attack by the Lithuanians in 1379 the Castle and the town were burned down. Soon after, the reconstruction of the Castle was commenced, but due to the lack of resources, progress was slow. In 1393 the main defensive tower was constructed or reconstructed but in the same year it was again burned down during an attack by the Samogitians (the tribe of žemaičiai). 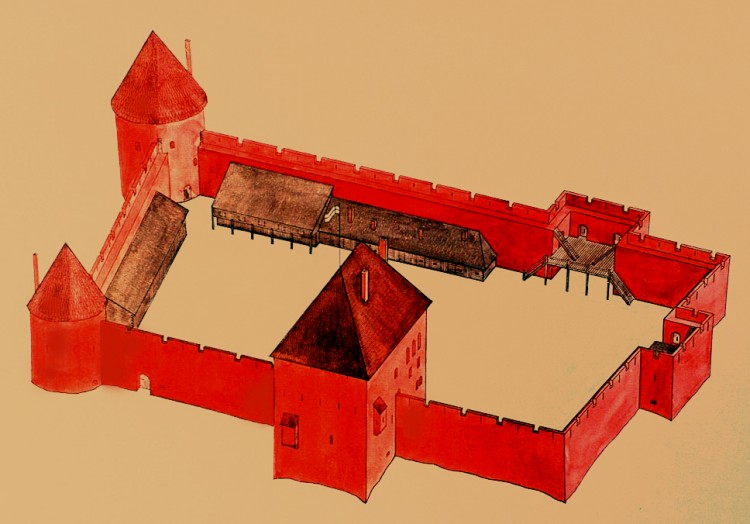 After the Battle of Gruenwald, the Lithuanians and their allies continued their attacks against Klaipėda Castle. The ancient defensive wall could not withstand the onslaught of the new artillery. In 1516 fortification work of the Castle commenced. In 1519 ramparts with 32 m diameter bastions were constructed. Written sources confirm that reconstruction of the Castle was carried out again in 1529. The newly constructed church was destroyed and the bricks were used for the enforcement of the Castle. After completion of the preparatory work, in 1546 the large cylinder tower was constructed in the northern corner of the Castle. It is assumed that the reconstruction work was supervised by the foreman Christoph Ramer from Nuernberg. The reconstructed Castle was given the form of an irregular square with an opening in the south-western side where the gates were located. Next to these, in the corners of the building, two cylinder towers were erected – Kurfiurst Tower and The Small Gunpowder Tower. There were two further towers, the Big Tower and the Big Gunpowder Tower (arsenal). Dwellings and household buildings were constructed inside the Castle and in the near neighbourhood of the outside walls 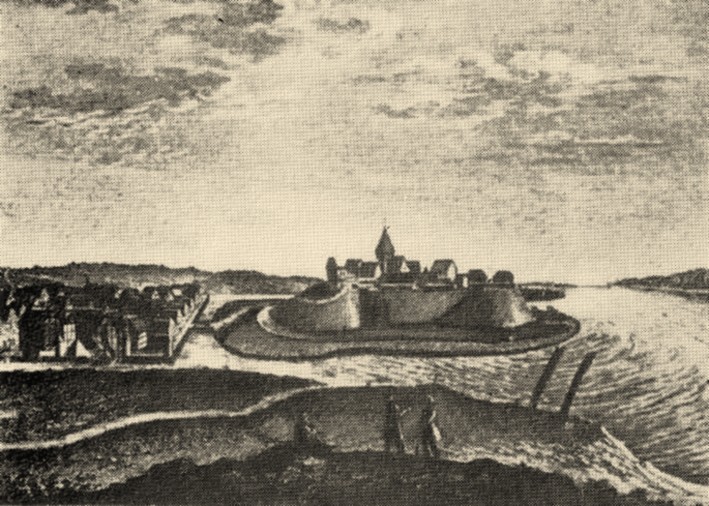 View of Klaipėda Castle and city. Engraving is dated on 1535

In 1559 the Frenchman Claudius Drohotius put forward a project to construct the bastions, but the project was not implemented as in 1598 Josua Putkamer and Hanns Philips Fuchs proposed a new project. However, we do not know whether this project was carried out. In 1627 steps were taken to improve the tower and fortify the town. Two years later, in 1629, the Swedes attacked and devastated the Castle. Yet another disaster was the fire in the Castle in 1660. Both the Gunpowder Towers, the mill and bakery were reconstructed only in 1666, but not much time passed and the Castle, together with building materials, were again destroyed by fire. The next fire with big losses was in 1669. Nevertheless Klaipėda Castle was again reconstructed and in 1686 one more stage of the improvement of the defensive system commenced. The last fortification of the Castle and the town continued from 1756 to 1763.

The Ruin of the Castle

Historic dates of the Castle of Klaipėda