History of the museum

The first attempts to found a museum in Klaipėda are dated from the beginning of the 20thcentury. During the general meeting of members of the "Sandora" Society under the leadership of priest Dr. V. Gaigalaitis, it was decided to establish the Library-Museum. After the Society acquired its own house, in 1912 the Library and attached Museum of History-Ethnography was opened. The periodical "Pagalba" ("Help") which was published by the Society thanked donors for the first displays and asked the Lithuanian people: "to bring more of these ancient remnants. Those at home only get scattered all over the place and get lost, but in "Sandora", they will be attractively and carefully kept for the future." There is no further information about the exhibitions at the Museum or the number of displays, nor about its activities after the World War I. 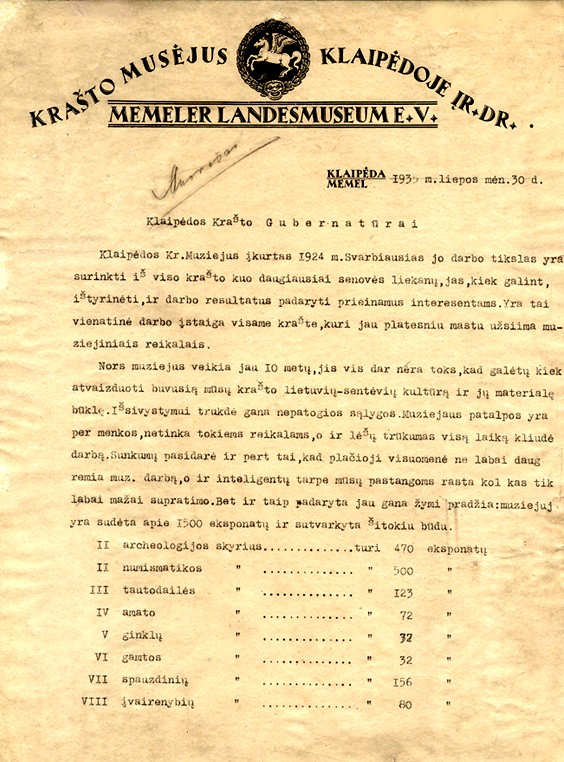 Document from the Klaipėda Museum to the Governor's office on 30 July, 1935

The beginning of the Museum is related to the events of 1924, when locally educated Lithuanians and Germans founded the Society of the Regional Museum of Klaipėda ("Memeler Landesmuseum e.V."). The 20th June 1924, the day of the General Meeting of this Society –sometimes named the "Constitutive Meeting" – is regarded as the birthday of the Museum. The Regulations of the Society were confirmed on 24th July 1924 and officially registerd on 24thMarch 1925. Dr. V. Gaigalaitis was elected as Chairman and Dr. Erish Scheu as vice Chairman. Fritz Ambrosius, a secondary school teacher, was elected Secretary with Dr. J. Žilius, his substitute. J. Stikliorius, was appointed Treasurer of the Society. The Head of the Town Library, Dr. Kemp, was appointed librarian and the archaeology enthusiast Major P. Tarasenka was appointed manager of the Museum. Unfortunately, after some years the Germans left the Society and the Museum management. The Museum didn't have a permanent premises and the displays were not abundant. In 1931 the Museum had 84 displays, 965 displays in 1934, and 1,545 in 1938. Most of them consisted of archaeological finds and collections of numismatic items. The most numerous of archaeological displays were collections of 600 objects from the Iron Age (guns, beads, brooches, bracelets, necklaces, rings, knives, etc from Aukštkiemis, Lumpėnai, Vilkiškiai and other old cemeteries). The numismatic collections were of Roman coins from 2nd and 3rd centuries AD.

The last record on the Museum's diary is dated 12th March 1939. The major part of the pre-war collection was lost and merely a few dozen of the old displays (mainly archaeological) are still kept by the Museum. 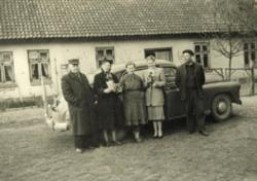 Collecting exhibits in the village of Dvyliai

In 1950 the first exhibition was arranged. In that year there were 1,542 displays and the Museum was visited by 15,208 visitors. In 1964 the first permanent exhibition was arranged and it was renovated in 1970–1971. In 1966 a branch of the Museum – Museum of the History of the Curonian Spit – was established in Nida and all displays relating to the Curonian Spit and the lagoon were transferred to this museum. In 1967 the section of local shore studies was established under the management of A. Každailis, which has since become the independent Sea Museum of Lithuania.

On 17th June 1988, the Executive Committee of Klaipėda decided to rename the Museum of Regional Ethnography of Klaipėda as the Museum of the History of Lithuania Minor and it was given the old wooden framed, or "fachwerk", buildings in the old town on Didžioji Vandens Street. For several years a permanent exhibition was established there, showing the earliest history of the Klaipėda region and Lithuania Minor. Today visitors can acquaint themselves with a rich knowledge of archaeology, cartography, numismatics, and original iconographic material and documents. In March 2000 the most recent part of the exhibition was opened, dedicated to the history of World War II and the first Soviet decade.

On August 5th 1992, near the Old Market in Šalkalvių St. a branch of the History Museum of Lithuania Minor, was opened – the Blacksmiths' Museum. Here are displayed items from the old cemeteries of Klaipėda, such as crosses, fences and gates, and weather vanes typical to the port region, which were saved from destruction. Also included are work tools of the Klaipėda blacksmiths and household articles.

The Castle Museum was inaugurated on August 1st 2002, during the 750th anniversary celebrations of the city of Klaipėda. The Museum's exhibits show the development of Klaipėda Castle and Klaipėda City during the 13th–20th centuries.

Since 2006 The History museum of Lithuania Minor was charged to take care of Sculpture park.