Prehistory of the region

Prehistory of this region begins around 10000 BC, when the last ice sheets retreated and a reindeer-hunter culture arose.
The Stone Age (10000–1800 BC) culture is represented by picks, axes, chisels and needles made from horn and bone. During this period, the Baltic Sea started to cast up amber onto the coast and amber articles and stones are also exhibited. During the late Neolithic Age (3000–2000 BC) the culture of the Pamariai (the Baltic Coastal) developed on the coast of the Baltic Sea with the essential features of the Indo-European culture – ceramics patterned with string imprintations, and axes formed in the shape of a boat. 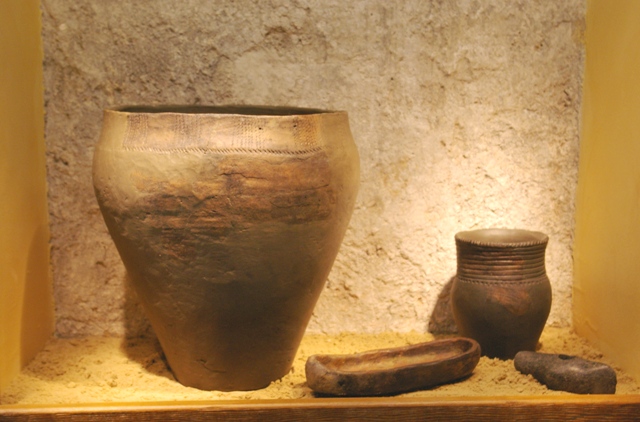 Ceramics of Baltic Coastal culture (Nida) and boat shaped battle axe. 3000-2000 BC. Photograph by A. Grušelionienė

The Bronze-Early Iron Age (1800 BC–400 AD)exposition begins with articles such as axes from stone, a snake-headed blunt pick, a stone mace head. Also shown are the main types of bronze decorations of the western Baltic region from the Roman period and samples of imported items from provinces of the Roman Empire such as various brooches, enamelled articles, glass enamelled beads, Roman coins. At this time the strongest influence on development of the western Baltic region’s culture was the “Road of Amber”. Thus the exhibition includes a map of the trade connections between the Baltic region and provinces of the Roman Empire.
Further in the exhibition are introduced finds from old graves of the western Baltic region (1st–4th c AD). These include spear tips, axes, scythes and decorations.Outstanding in this collection is an impressive brass brooch from a woman’s grave from Bandužiaiburial ground. The adornmentweighs 1120 grams. Furthermore, this pendant set is unique. A similar set of jewellery has not been found in the Baltic Sea basin.
During the Middle Iron Age (400–900 AD) the Baltic tribal unions formed. In this exhibition there is the map of this process. This period is represented by several spearheads, axes and other weapons, brooches, bracelets, clay and amber spindle-whorls, miniature cups, etc. The finds from the old cemetery of Vidgiriai (5th–6th c AD) shows the process of the nation’s migration. Next to Baltic burial traditions appears burial customs brought by the multi-ethnic army with new types of decorations and weapons.
During the Late Iron Age (10th–13th c AD) a big influence on the western Baltic economies and culture came from contacts with the Vikings. Imported articles and imitations made by local craftsmen are exhibited, such as a weight of weaving-loom decorated with cruciform stamps, glass beads, sword chapes, a spearhead, a flint striker, belt separators, etc. Also exhibited is the shroud of a rich woman from Palanga cemetery with bronze twisted necklace, pins, massive bracelets, etc. 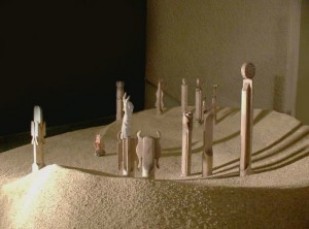 The exhibition ends with a model of paleo-astronomic structures on Birutėʼs Hill in Palanga recreated by S. Manomaitis.