The Castle Museum was inaugurated on August 1st 2002, during the 750th anniversary celebrations of the city of Klaipėda. After several decades, the idea, cherished by the leading figures, archaeologists and historians of the City, to make the site of Klaipėda Castle accessible to everyone, became a reality. 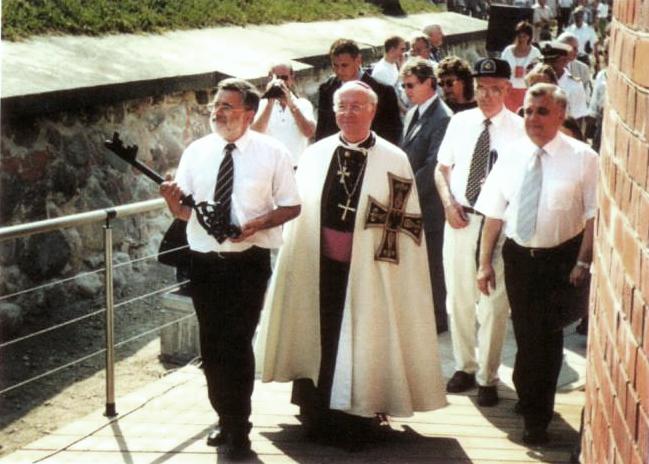 The Castle Museum is located in the Prince Friedrich chamber under the bastion, where artillery was stored in the 17th century. The Museum's exhibits show the development of Klaipėda Castle and Klaipėda City during the 13th–17th centuries.
The exhibition begins in the tunnel of the chamber, where exhibits are displayed according to the different stages of development of the Castle and City in the 13th–17thcenturies.
The first stand shows weapons and adornments of the Curonians. Before the settlement of the Order, the  region around Klaipėda belonged to the Courish Pilsotas land with its own distinctive and rich culture.
A second stand is devoted to the establishment of Klaipėda, in which a copy of the Castle Foundation Letter and a scale model "The situation of Klaipėda Castle and City in the 13th century" are displayed. Various household utensils from the 14th–15th centuries found in Klaipėda Castle, and models of the Castle and City are displayed in further stands.
Displays devoted to the 16th century contain one of the most significant exhibits of the Museum, a gold ring inlaid with a precious stone. 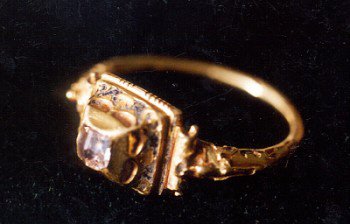 Renaissance ring with an inlaid diamond found on the Castle site. Photo by K. Demereckas 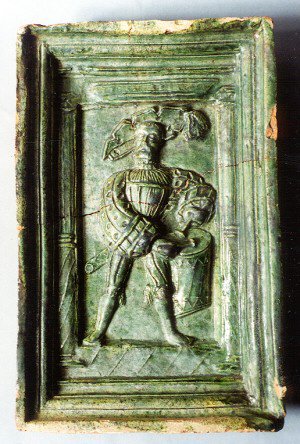 A Renaissance tile from the 16th century found in the old town of Klaipėda. Photo by A. Katkovas 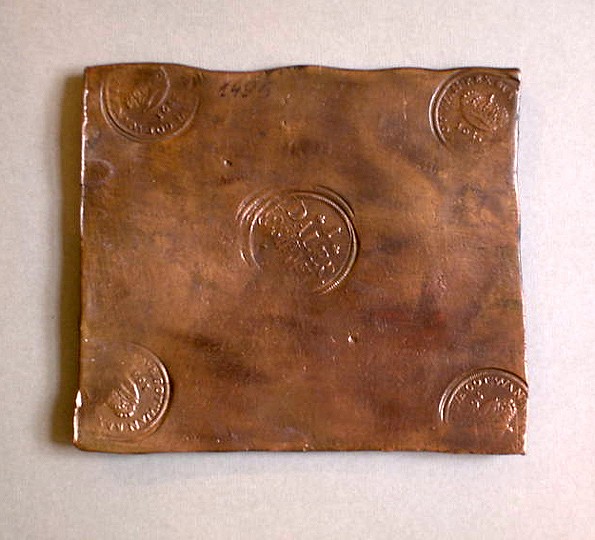 The last displays contain renaissance tiles, brewer's accessories and household utensils, blacksmith's and shoemaker's instruments and articles.The room in the chamber close to the tunnel depicts a 17th century domestic scene with sitting mannequins dressed in clothes characteristic of that period. Restored earthenware found during excavations of the old town and the Castle is displayed alongside. 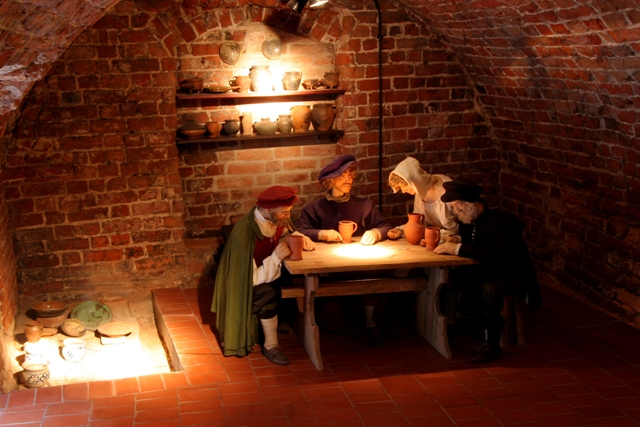 Mannequins with reconstructed clothes of the townsfolk of the 17th century. Photo by D. Čižaitė

An impressive 2 x 2,5 metre model located in the grand room of the chamber acquaints the visitors with the lay-out of the City and Castle during the 17th century. Here the preparations for the repulsion of the Swedish army is depicted as well: armed soldiers stand near a two-meter long cannon weighing 1 ton, which was found during reconstruction of the bridge near the site of the Castle. On the other side of the hall, close to the remains of the 14th century bridge, a mannequin represents the scene of the reconstruction works of the Castle. 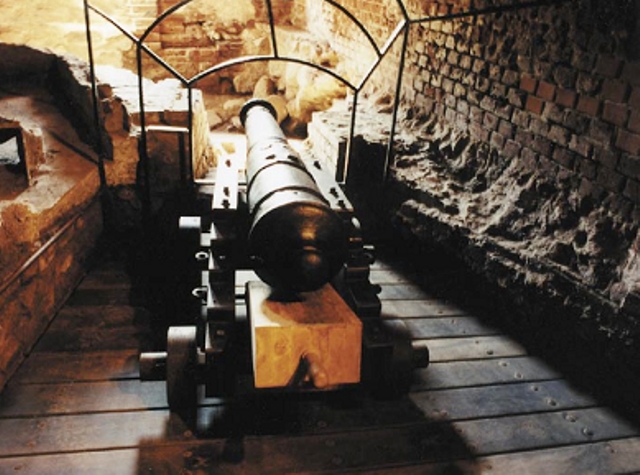 Authentic weapons, wooden tools, household articles from the 16th and 17th centuries and other exhibits are displayed in the niches of the grand hall.
Interactive computer displays in the Museum will certainly attract the visitor's attention. Using the computer, visitors can search for additional information on the origin of the names "Klaipėda" and "Memel", the origin of the City coat of arms and its symbols, the households of ordinary townsfolk, and the development of the City from the founding of the Castle until the 17th century. Using a simple touch-screen visitors can stroll about Klaipėda Castle of the 17th century, its yard and premises.
While visiting the Museum it is worth looking around the uncovered remains of the Castle. Archaeologists have uncovered the foundations of the building of the 14th–17thcenturies. The foundation of the Grand Gunpowder Tower is particularly impressive.
Visitors of the Castle Museum can also walk along the oldest roadway in Klaipėda, dating back to the 16th century, and enjoy a panorama of Klaipėda from Friedrich's bastion.

A continuation of the Castle Museum’s exposition was opened in a newly restored Prince Karl chamber on 1 August 2006. The exhibit presents the every day life and the economic, cultural life of Klaipėda throughout the centuries. Historical events are illustrated with documents, engravings, photographs from the museum collections as well as from the Lithuanian and German archives and private collections. More attention was dedicated to the most important events topics, such as, Klaipėda, the temporary Prussian capital, the 1854 fire,the French Rule 1920–1923, the Lindenau ship building factory and others. 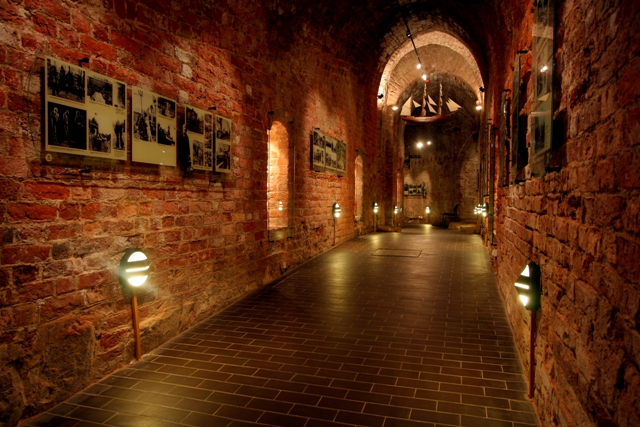 The authentic chamber house an exhibition of 18th – 19th century blacksmith works, pottery, imported items, 19th century city stamps, and a ceremonial Masonic goblet, made by local artisans in 1850. There is also an impressive model of “Achilles”, a three-masted bark made by the famous Klaipėda ship builder Behrend Pieper in 1864. The second part of the 20thcentury is represented by the most characteristic soviet items and exhibits illustrating the most recent part of Klaipėda history. The exposition ends with a vision of the future development of Klaipėda.