History of the region

For centuries Klaipėda and its environs were governed by Germans including the German Order, Prussian Principality, Prussian Kingdom and the German Empire. It was an out-of-the-way region, having no natural economical hinterland and of little interest to Koenigsberg. At the beginning of the 20th century Klaipėda was left behind, even by Tilzit, in terms of population. Klaipėda, together with other bigger towns and estates, was German and the majority of the people were the so-called lietuvininkai, people of Lithuanian origin, and were influenced for many years by German culture and Protestantism. In the literature after World War II the term of "minor Lithuanians" – from the German word "Kleinlitauer" was widely used. At the turn of the 20th century, industrious and dutiful landowners still maintained their language and traditions, but the younger generation was strongly influenced by the Germanization which commenced in the times of Bismark. The people of Lithuania Minor were obedient and loyal subjects of the Prussian and German governors. Belonging to the lowest social strata, for quite a long time they did not have educated people of their own able to awaken national self-consciousness. The first cultural societies and organizations of Lithuania Minor were founded only at the end of the 19th century and Tilzit was the center of their activities but only a small part of the population of Lithuania Minor was involved in these public activities. The reason for this was a negative attitude of the Lithuanian Christian organisations towards the activities of Vydūnas and other public activists.
The definition of the Klaipėda region appeared only after World War I when by the Peace Treaty of Versailles the territory on the right shore of the Nemunas was separated from Germany. This included the most Lithuanian part of Lithuania Minor which had been governed by Germans for many years. The area was a narrow belt from Smalininkai to Nemirseta 140 kilometers in length and 15–20 kilometers wide. The Klaipėda region including the Curonian Spit was 2848 sq. km in area. At the beginning of 1925 the number of inhabitants were approximately 141,000. Administratively this region was divided into the town of Klaipėda and Klaipėda District, Šilutė District and Pagėgiai District. In 1920–1922, under the terms of the Treaty of Versailles, the French governed the region. 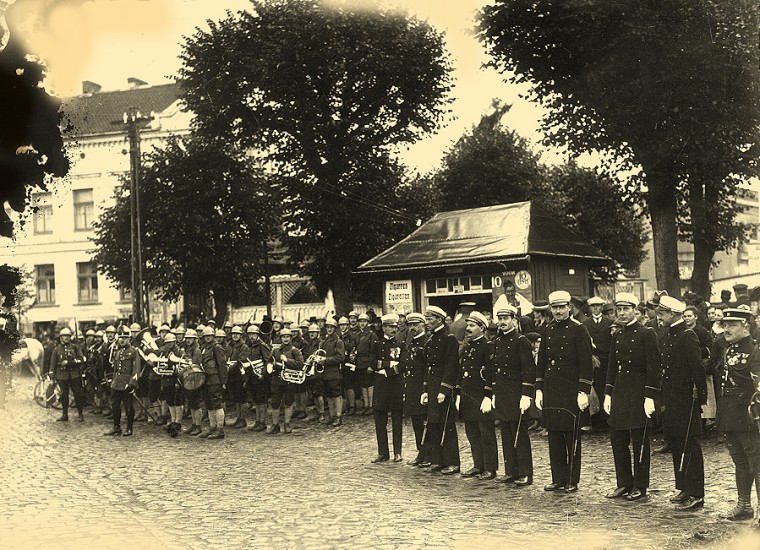 Parade of the French war garrison Theatre Square about 1921-1922

Between 19 of February in 1923 and 22 of March in 1939 Klaipėda region depend to Republic of Lithuania by the principles of autonomy.Photography, documents, awards, examples of products of the local companies, household accessories and others illustrates political, economic and cultural life of the region.